Where did the Paschal Troparion Come From?

﻿Christ is Risen!
Indeed He is Risen! 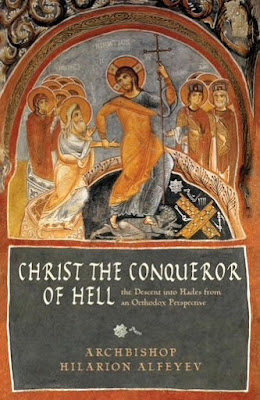 ﻿
I am currently reading a fine study by Archbishop Ilarion Alfeyev (Russian Orthodox Church), entitled: ﻿Christ the Conqueror of Hell - the Descent into Hades from an Orthodox Perspective. ﻿Actually, it is an outstanding study in which a detailed survey of this theme from multiple sources - the New Testament, apocryphal literature, early Christian poetry, patristic literature and Church hymnography - clearly reveals just how central it is to the Church's proclamation of the Gospel: the Good News that Christ "has destroyed death by death." That phrase is, of course, from the paschal troparion which we all know and love so well.

I have always wondered about the origin of that troparion, meaning just when and where does it come from? And, lo and behold, Archbishop Ilarion addresses this question in a subsection of the book's opening chapter, under the heading of: "Early Christian Poetry."

Actually, not all questions are answered in his brief survey, but he offers an explanation that shows how intertwined the various elements just listed are brought together to shape our final liturgical expressions. Instead of trying to paraphrase him, I will simply cite the relevant passage so that you may also find an answer to that question: from whence to we derive that "hymn of all paschal hymns?" Archbishop Ilarion begins as follows:

The themes of Christ's descent into Hades and his victory over hell and death are treated extensively in surviving early Christian poetry. We do not know precisely when the short hymn known as the Easter troparion was composed. It is likely, however, that it was already written in the second century (similar hymns, or "tropes," which were paraphrases of texts from Scripture, were an inseparable part of early Christian services) and it continues to be used in the services of the Orthodox Church: "Christ is risen from the dead, trampling down death by death, and upon those in the tombs bestowing life."

This hymn reflects a theological idea formed in the second century by St. Irenaeus of Lyons, that the redemptory sacrifice of Christ, the second Adam, is a "recapitulation" (i.e., a backward reproduction) of the life of the first-created Adam. who personifies all mankind. In order to "restore in himself all people who came from Adam, all nations and mankind along with Adam himself," Christ systematically goes through all the main stages of human life so that the effects of the fall of Adam might be corrected in each of them. By his becoming the "first-born of the dead," Christ renews people for the divine life, "having himself become the first of the living, just as Adam became the first of the dying." (Irenaeus of Lyons, ﻿Against Heresies ﻿3, 20, 3) Christ's death therefore becomes a victory over death, and his resurrection brings life and resurrection to the dead. The doctrine of Christ's descent into Hades is later developed in works of liturgical poetry precisely in this vein.
(﻿Christ the Conqueror of Hell, pp. 34-35.)

Again, perhaps not an exact pronouncement on the origins of the paschal troparion - which even Archbishop Ilarion states "we do not know precisely" - but a convincing conjecture that the hymn could go back as far as the second century, because the emerging theological Tradition of the Church began to clearly elucidate the teaching of the descent of Christ into Hades in order to "destroy death by death." The Fathers of the Church further developed the salvific content of that descent or, we could say, the human consequences of that victory over death, by stating that those lost in the realm of Hades/death had life "bestowed" upon them. From such a convergence of powerful expressions of Christian faith, it is clear just how the paschal troparion could emerge as a short, but definitive, statement of how we conceive and proclaim that Christ is the Conqueror of Hell.

This is a book worth reading!
Posted by Orthodox Christian Meditations, by Fr. Steven Kostoff at 11:06 AM