The Heresy of the Rapture 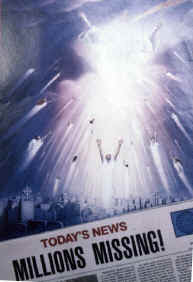 I was barely aware of the story over the weekend concerning a small(?) group of Fundamentalist Christians who were awaiting the “rapture” that would anticipate and prepare the world for its demise and the final judgment. I must have lagged behind in keeping up with the news – or at least certain newsworthy stories. Yesterday, however, I read a lead article about the self-appointed “preacher” who found himself “flabbergasted” that his calculation of May 21, 2011, as the day of the “rapture” did not actually materialize. I believe that he is now in hiding, though he did boldly predict that he now believes that a date in October of this year will be the actual day of the “rapture.” His poor followers are left to pick up the pieces of their shattered dream and return to the endless challenges of the “daily crosses” we often must bear in the quotidian reality of “this world.”

As an Orthodox Christian I am perfectly indifferent to any and all dates that may be calculated concerning the so-called “rapture,” for the simple but important reason that we do not believe that there will be a rapture as envisioned by various Protestant sectarians since the 19th c. This is a teaching – or belief – that has never been part of the Church’s Tradition and which we can probably label a “heresy” with some legitimacy. We believe that this is a false teaching that is contrary to the Scriptures and the ongoing Tradition of the Church. As I just mentioned, the origin of the rapture teaching is as recent as the 19th c. And I believe that the teaching is credited to a certain John Darby. This is a part of what is further termed Protestant “dispensationalism.” However, the twelve(!) volumes of the fictional Left Behind series by Tim LeHaye and Jerry Jenkins have recently popularized “rapture theology” with probably disastrous results for many Christians who were taken in by this bogus and fear-creating theology. And this “theology” is painfully superficial and artificial, based upon a misreading of a few biblical texts (I THESS. 4:13-18; MATT. 24:39-42; JN. 14:1-2) These authors – regardless of their sincerity – ironically became multi-millionaires as they wrote about the end of the world and the last judgment, in a series of best-sellers. Might as well enjoy yourselves and come to terms with “mammon” while waiting for Jesus to take you out of the this world of tribulation and sorrow! There is also a strong militarist “right-wing” component to the Left Behind series that has political implications for American foreign policy in the Middle East. Fortunately, it does seem as though a good deal of this has died down in recent years as this series of books has lost some of its momentum. I never felt the slightest temptation to read any of this literature, not even for the sake of maintaining an awareness of what was attracting so much attention.

Another irony is that many biblical literalists cannot support their claims from the Scriptures. For example: The word “rapture” does not appear in the Bible! It is an artificial construction, based upon cutting and pasting together the biblical passages that are mentioned above. For those who are blissfully ignorant of rapture theology, perhaps a short description may be helpful. The “rapture” claims that Jesus will descend from heaven and take up true believing Christians into the air with Him – hence the “rapture” (from the Latin raptio, “to snatch”); and hence all of those unanticipated driver-less cars that will be careening around our streets and freeways as so many weapons that God can further use to punish the non-believers. Christ will then essentially “turn around” and “return” to heaven with these true believers who will be spared the seven years of horrible tribulation unleashed upon the earth before He returns again in a definitive manner to inaugurate the end of the world and the last judgment. We are now presented with a two-part Second Coming of Christ that again has no biblical or creedal support. This scenario offers the false comfort to Christians that they will not have to share the sufferings of the world with their fellow human beings, legitimately prophesied in the Scriptures for the “end of the world” This is also blatantly in contradiction to the Scriptures (see MATT. 24:21-22).

As Orthodox Christians, we believe in the Second Coming of Christ, as stated in the Nicene Creed, when “He will come again with glory to judge the living and the dead.” But Orthodox theologians do not spend/waste their time calculating the time of the Parousia, nor do they attempt to describe what is essentially indescribable. Vigilance and preparedness are essential virtues according to the teaching of Christ. Our own deaths will come soon enough, and these will serve as our “personal judgments” before the Final Judgment for which we pray to have a “good defense.” There is more than enough there to occupy us in the interval. As a Serbian proverb says: Work as if you will live to be a hundred; and pray as if you will die tomorrow.

Another dreary effect of these stories is that the media and non-believers can mock Christians or Christianity for these supposedly non-fulfilled prophecies. I understand there were entire websites devoted to ridiculing this latest group and their vigilance in waiting to be raptured up on May 21. There were even “rapture parties.” The gleeful chatter and cynicism of the unbelieving world was very much a part of this sad story. Christianity remains in some minds to this day to be preoccupied with “Judgment Day” and the fear of God – together with God’s wrath toward sin and disbelief. Deservedly so one could argue, but it keeps the Gospel on the defensive and again sends very confusing signals as to what various Christians believe. Concentration is taken away from the love of God expressed so powerfully in the Incarnation, Death and Resurrection of Christ; of the sacramental life of the Church; of a life of serious prayer; and of the joy in the hearts of believers who trust in the further fulfillment of the promises of God.

Finally, there are the deeply disappointed, disenchanted, confused, and bewildered Christians who actually believed this “prophet.” Many of them distributed their assets and could be facing a bleak future of readjustment to life in the world. Now what do they do? Who now to listen to? How many will abandon their faith in Christ as they will feel as if Christ “let them down?” I feel very sorry for these people and hope that they can put their lives back together again on a solid footing with their basic Christian faith intact, though with a greater capacity for true discernment and a better knowledge of the Scriptures.

Just a few thoughts on yet another failed prophecy on the end of the world. Apparently, it’s back to work for everyone.
Fr. Steven
Posted by Fr. Steven Kostoff... at 6:41 PM