Rejoicing in the "Deathless Death" 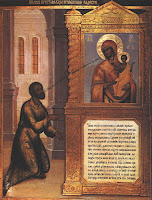 "Words cannot attain to what is beyond speech, just as eyes cannot stare at the sun. But though it is impossible for us to tell of things surpassing words, we can, by the love of those we extol, sing their praises, and we may use words to pay our debt, and express our longing for the Mother of God in hymns as best we can, without in any way touching the intangible." ~ St. Gregory Palamas, Homily On the Dormition.

As I like to occasionally point out, the Twelve Major Feast Days of the Church year do not simply "come and go" in a twenty-four hour period. In fact, if you glance at a church calendar, you may come across the following notations when encountering a major Feast: "forefeast," "afterfeast," and "leavetaking (of the Feast)." This is well-illustrated by the Feast we are now continuing to celebrate - The Dormition of the Theotokos. In the Festal Menaion that most of our parishes use (the one translated by Mother Maria and Archimandrite Kallistos Ware), we read the following notation concerning this particular Feast:

This is the "longest" of the Feasts dedicated to the Mother of God in terms of duration and, as the dates fall this year, the "Leavetaking" will occur this coming Sunday, August 23. Therefore, we will again have the joy of expressing "our longing for the Mother of God in hymns as best we can," as St. Gregory Palamas has so eloquently stated. This has been the case throughout this past week, as the Church allows us to further contemplate and experience the mystery of the falling asleep of the Theotokos and its bearing on our lives. There is nothing more "theo-logical" than connecting the life and death of the Mother of God with that of her Son and Savior, our Lord Jesus Christ. The Lord did not pass through His mother, but was truly born of her, "ineffably" and "without seed" as we sing and chant when praising this great mystery of the Incarnation. If the Mother of God held her Son in her arms when He was born; then when she is "born" into the new life of the Kingdom of God, her Son will bear her soul in His arms:

She who is higher than the heavens and more glorious than the cherubim, she who is held in greater honor than all creation, she who by reason of her surpassing purity became the receiver of the everlasting Essence, today commends her most pure soul into the hands of her Son. With her all things are filled with joy and she bestows great mercy upon us.

Sing, O ye people, sing ye the praises of the Mother of our God: for today she delivers her soul, full of light, into the immaculate hands of Him who was made incarnate of her without seed... (Lity at Great Vespers)

But since the Mother of God is not the "great exception" but rather the "great example," she embodies our greatest longing and hope for human beings created "in the image and likeness of God:" To truly "fall asleep" in the Lord surrounded by our loved ones, as she was surrounded by the apostles and friends, according to Tradition; to offer our soul/life to the Risen and ever-present Lord as a final eucharistic gift in the humble assurance that He will receive it and "carry" it into His everlasting Kingdom; and that we are buried to the accompaniment of "psalms, hymns and spiritual songs" that express our belief that death has been overcome in the death and resurrection of Christ. Although not an "official dogma" of the Church, the belief exists that the Mother of God was bodily "translated" to heaven, since the Lord did not allow the most pure temple of the Word to experience corruption:

The Lord and God of all gave thee as thy portion the things that are above nature. For just as He kept thee virgin in thy childbirth so did He preserve thy body incorrupt in the tomb; and He glorified thee by a divine Translation, showing thee honour as a Son to His Mother. (Matins, First Canon, Canticle Six)

As Archbishop Kallistos says in his explanation of the theological meaning of this Feast:

... Orthodox Tradition is clear and unwavering in regard to the central point: the Holy Virgin underwent, as did her Son, a physical death, but her body - like His - was afterwards raised from the dead and she was taken up into heaven, in her body as well as in her soul. She has passed beyond death and judgment, and lives wholly in the Age to Come. The Resurrection of the Body, which all Christians await, has in her case been anticipated and is already an accomplished fact. That does not mean, however, that she is dissociated from the rest of humanity and placed in a wholly different category: for we all hope to share one day in that same glory of the Resurrection of the Body which she enjoys even now. (Festal Menaion, p. 64)

However, this affirmation that belongs to the inner Tradition of the Church has, as stated above, never been accorded dogmatic status by the Church. And no doubt is left open to speculation concerning the death of the Theotokos. She died according to the necessity of death that plagues our fallen human nature as that is "inherited" from of old. Her death, therefore, cannot be termed "voluntary" as was the death of her Son. Her Son, the Lord Jesus Christ, is her Savior, as He is ours. As Fr. Thomas Hopko has written, summing up her exemplary role for all Christians:

The feast of the Dormition is the sign, the guarantee, and the celebration that Mary's fate is the destiny of all those of "low estate" whose souls magnify the Lord, whose spirits rejoice in God the Saviour, whose lives are totally dedicated to hearing and keeping the Word of God which is given to men in Mary's child, the Saviour and Redeemer of the world. (The Orthodox Faith, Vol. ii, Worship, p. 145)

The Feasts of the Church are a feast of theological reflection and existential participation, as they actualize the events of our salvation and deification in the "today" of the Church's ongoing life in the world. We can further rejoice in the "deathless death" of the Theotokos as we come to church this weekend to worship the living God Who makes all things possible.