Encountering Christ through the Samaritan Woman

Christ is Risen!
Indeed He is Risen! 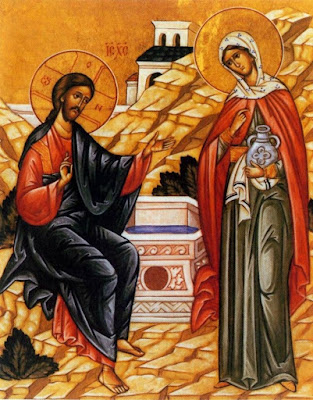 In this post-paschal week as we approach the Feast of the Ascension and Pentecost, we continue to explore the wonderful dialogue and encounter between Christ and the woman of Samaria (Jn. 4:1-42).
I will admit that this is one of my "favorite" passages in the entire Bible. I would like to therefore share some further insights into this endlessly rich passage from the Gospel according to St. John. To appreciate this passage all the more, we need to bear in mind that Jesus overcame two strict boundaries in this meeting:
1) Openly speaking with a woman while alone in her presence ("They marveled that he was talking with a woman"); and
2) speaking with a Samaritan ("For Jews have no dealings with Samaritans").
In this one encounter, Jesus elevates the role and status of women by speaking to her of divine mysteries. He also elevates the role and status of non-Jews by revealing himself to the Samaritans as the "Savior of the world."

Concerning the dialogue with a woman, Origen (+254) wrote the following in his Commentary on the Gospel of St. John:

We know that he is meek and lowly of heart (Matt. 11:29) and does not disdain to speak of such great matters with a woman carrying water who goes out of the city because of her great poverty and labors to draw water for herself. When the disciples arrive they are amazed, for they previously beheld the greatness of the divinity in him, and they marvel that so great a man  was speaking with a woman. We, however, carried away with pride and arrogance, despise those below us and forget that the words "Let us make man according to our image and likeness" apply to each person.

As to speaking with a Samaritan, St. John Chrysostom (+407), said the following in one of his homilies on the Gospel of St. John:

...And so the woman, on being told, "Give me a drink,"  very naturally asks, "How is that you, being a Jew, ask a drink of me, a woman of Samaria?" ... She knew he was a Jew from his appearance and speech.

Observe how considerate she is here. For even if the Lord had been bound to abstain from dealing with her, that was his concern, not hers. The Evangelist does not say that the Samaritans would have no dealings with the Jews but that the Jews have no dealings with Samaritans. The woman, however, though not at fault herself, wished to correct what she thought was done unlawfully.

Somewhat randomly, I would like to also include a fine passage from a contemporary biblical scholar, Brendan Byrne, from his book Life Abounding - A Reading of John's Gospel. At the conclusion of their dialogue, the Samaritan woman returns to her town and says to her fellow townsfolk: "Come and see a man who has told me all I have ever done. Can this one be the Christ?" As to her question, Byrne writes: "The opening Greek negative participle, meti, need not necessarily foresee a negative answer. It can express a cautious opinion designed to stimulate reflection."

But I would like to concentrate on Byrne's paragraph developing the phrase "come and see:"

"Come and see" echoes the invitation of Jesus to the first two disciples (1:39), as also Philip's invitation to the initially reluctant Nathanael (1:46). More significant still is the reason the woman gives for coming to see the one with whom she has been speaking: he has told her all she has ever done (v. 29b). That is the literal meaning of the Greek and doubtless refers to Jesus' knowledge of her private life that led to her regarding him as a prophet.  But to leave the statement there would miss something of a possible wider meaning.

I have seen it translated, "Come and see a man who has told me the story of my life," a rendering far more truly expressive of the conversion that the woman has undergone. Jesus has taken the broken fragments of her life and shown that they can be part of a wider pattern of meaning in which her personal story and that of her people can be gathered up into the transcendent narrative being worked out in his mission from the Father. Her life, in its failures and deviations no less than in its strengths and successes, has meaning and value within the wider "great story" of salvation.

We need to imagine just how different the Samaritan woman was after her dialogue and encounter with Christ at Jacob's well. She went to the well for the prosaic but essential task of drawing water for herself and her family. She returned with great enthusiasm believing that she had met the Christ! Her quest for natural water led her to drink of "living water." Truly, as Brendan Byrne writes, this was a "conversion!"
I believe that if we could "slow down" our rushing lives just a bit, then we can enter into a dialogue with Christ that will be a real encounter that quenches our thirst for something truly meaningful - the "living water" that Christ promises. That dialogue and encounter are possible through faith and prayer, strengthened by the reading of the Holy Scriptures.
Posted by Orthodox Christian Meditations, by Fr. Steven Kostoff at 10:30 AM