The Cross: 'To Refresh Our Souls and Encourage Us'

The Third Sunday of Great Lent - the Sunday of the Cross - must take on a greater resonance for us as we continue to struggle with the ever-encroaching presence of the coronavirus.
Of course, our church services are severely limited and most of you will find yourselves at home on Sunday morning. But during that time, everyone should take a conscious break away from the internet, from our smartphones and from our televisions and turn to the Gospel and prayer.
As I continue to say, the Gospel reveals the "big picture" about life and death. For the Lord transformed an instrument of death into a path to life everlasting. As a nation, we are collectively taking up a cross despite our unwillingness to put our current crisis in that language. The Cross of Christ has no place whatsoever in a society enamored with a sense of entitlement and the guarantee of a "good life." (In a secular society can there even be a source to this entitlement and this guarantee of a good life?).
Yet, as Christians, we claim to be "cross-bearers," as opposed to simply being "cross-wearers." We trust in the Lord and place ourselves in His hands. We continue to pray for a swift end to this pandemic. And yet, the future days, weeks and months ahead of us remain an unsettling prospect of further disorientation. So, let us make room for the Cross and Resurrection to fill in the "big picture."

The following meditation from a few years ago, is meant to focus our attention on Christ as we journey further into Great Lent and the great culmination of the Cross and Resurrection. This is our hope and our joy!

The Cross: 'To Refresh Our Souls and Encourage Us' 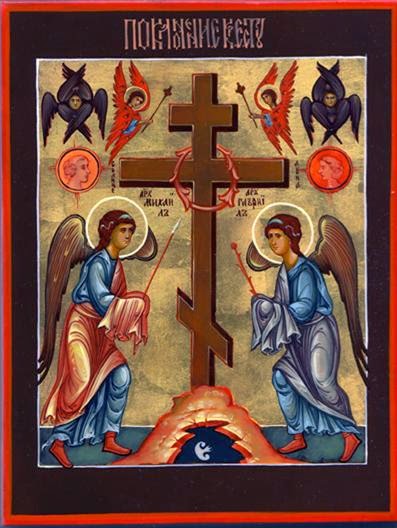 “Before Thy Cross, we bow down in worship, O Master, and Thy Holy Resurrection, we glorify.”

This hymn – together with the accompanying rite of venerating the Cross – replaces the usual Trisagion hymn during the Divine Liturgy on the Third Sunday of Great Lent. According to The Synaxarion of the Lenten Triodion and Pentecostarion, the full title of this mid-lenten commemoration is “The Sunday of the Veneration of the Precious and Life-Giving Cross.” Notice, that though our concentration is on the Cross of our Lord, the hymn culminates with the Resurrection.  This is in full agreement with the Gospel passages in which Christ reveals to His disciples that He is bound for Jerusalem and death on the Cross and that He will rise on the third day. (MK. 8:31; 9:31; 10:34)
In a wonderful commentary, The Synaxarion sets before our spiritual sight the meaning of this particular commemoration and its timing:

The precious and Life-Giving Cross is now placed before us to refresh our souls and encourage us who may be filled with a sense of bitterness, resentment, and depression.  The Cross reminds us of the Passion of our Lord, and by presenting to us His example, it encourages us to follow Him in struggle and sacrifice, being refreshed, assured and comforted. [p. 78]

Hopefully, the first three weeks of the Fast – even if we have truly “crucified the flesh with its passions and desires” [Galatians 5:24] – have not led us to experience “bitterness, resentment and depression!”  However, we could be suffering from precisely those spiritual wounds for other reasons and diverse circumstances in our lives, both external and internal.  My own pastoral experience tells me that this is probably – if not assuredly – the case.  And there is no better time than Great Lent to acknowledge this.  Such acknowledgment could lead to genuine healing if pursued in a patient and humble manner.

How, then, can we be healed?  Perhaps the Sunday of the Cross reveals our basic starting point.  The Cross of our Lord, placed before our vision, can release us from our bondage to these passions when we realize that Christ transformed this instrument of pain, suffering and death into an “emblem of victory.”  Christ has absorbed and taken our sins upon Himself, nailing them to the Cross. In the process, “He disarmed the principalities and powers and made a public example of them, triumphing over them in Him" -- or, in some variations, “in it,” meaning the Cross [Colossians 2:15].  These “principalities and powers” continue to harass us to this day, but if we are “in Christ,” then we can actualize His victory over them and reveal their actual powerlessness.  Our lenten journey is leading us to the foot of the Cross and to the empty and life-giving tomb, and the Third Sunday of Great Lent anticipates our final goal so as to encourage us.  Again, from The Synaxarion:

As they who walk on a long and hard way are bowed down by fatigue find great relief and strengthening under the cool shade of a leafy tree, so do we find comfort, refreshment, and rejuvenation under the Life-Giving Cross, which our Holy Fathers 'planted' on this Sunday.  Thus, we are fortified and enabled to continue our Lenten journey with a light way, rested and encouraged. [p. 79]

Certainly none of the above is meant to deflect our attention away from the “scandal of the Cross” by poeticizing this scandal away in pious rhetoric.  We must never lose sight of the sufferings of our Lord on the Cross, and the “price” He paid to release us from bondage to sin and death.  The world in its indifference will never come to understand the enormity of Christ’s sacrifice.  So as not to lose sight of the utter horror of crucifixion as a form of capital punishment, I would like to include a passage from Martin Hengel’s book Crucifixion:

Crucifixion satisfied the primitive lust for revenge and the sadistic cruelty of individual rulers and of the masses.  It was usually associated with other forms of torture, including at least flogging.  At relatively small expense and to great public effect the criminal could be tortured to death for days in an unspeakable way.  Crucifixion is thus a specific expression of the inhumanity dormant within men which these days is expressed, for example, in the call for the death penalty, for popular justice and for harsher treatment of criminals, as an expression of retribution.  It is a manifestation of trans-subjective evil, a form of execution which manifests the demonic character of human cruelty and bestiality. [p. 87]

So much for the “noble simplicity and greatness” of the ancient world - and the contemporary world, for that matter!  But there is “nothing new under the sun,” and fallen human nature is just as cruel and evil today.  Again, Christ absorbed all of that human cruelty and bestiality on the Cross.  This was a scandal, for the Son of God died the death of a slave on the Cross [Philippians 2:8].  Now, as a “new creation” in Christ, we must of course manifest our freedom from precisely that dark and demonic abyss into which human beings can plunge, and manifest the transfiguration of our human “energy” into the virtues that are so wonderfully revealed in the lives of the saints.  This was the prayer of the Apostle Paul when the light of the crucified and risen Lord began to shine in a world of darkness:

May you be strengthened with all power, according to His glorious might, for all endurance and patience with joy, giving thanks to the Father who has qualified us [or you] to share in the inheritance of the saints in light. He has delivered us from the dominion of darkness and transferred us to the Kingdom of His beloved Son, in Whom we have redemption, the forgiveness of sins. [Colossians 1:14]

The Church understands and will put before our gaze the sufferings of the Lord during Holy Week.  But it is also from within the Church that we come to know the victory of Christ achieved through His death on the Cross and fully revealed in His Resurrection.  Thus the marvelous paradox of venerating a “Life-Giving Cross!”  The rhetoric of the Church’s language is thereby not empty but revelatory of a mystery that has been accomplished in our midst.  The Synaxarion concludes its section on “The Sunday of the Veneration of the Precious and Life-Giving Cross” with the following prayer, a fitting way, I hope, to conclude this meditation:

O Christ our God, through the power of the Holy Cross, deliver us from the influence of our crafty enemy and count us worthy to pass with courage through the course of the forty days and to venerate Thy divine Passion and Thy Life-Giving Resurrection.  Be merciful to us, for Thou alone art good and full of love for mankind.  Amen.

Posted by Orthodox Christian Meditations, by Fr. Steven Kostoff at 9:08 AM