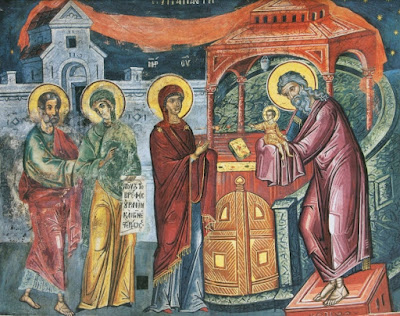 Here is a fine and timely reflection from Dr. Edith Humphrey, an Orthodox scholar who is a fine contemporary voice witnessing to the Orthodox Faith in today's world. It is a former Protestant's honest reflection of how the Theotokos is perhaps initially for many a potential obstacle to embracing Orthodoxy; but who, with time, openness and deep meditation, becomes a central figure in the entire divine mystery of the Incarnation of the Son of God. Dr. Humphrey has recently published a book that offers an Orthodox reading of C.S. Lewis.

"Feeling grateful on the Feast of the Presentation, the hymn for which was key in my movement into Orthodoxy eleven years ago. For thirteen years, a key block had been the prominence of holy Mary, whom I feared was a "layer" between God and the believer.

"No. The arms of the Theotokos, like the tongs used for the living coal with Isaiah, presented Christ to the elder Symeon, and so in her intercession she presents Him to all of us. Her role is no obstacle between us and God, nor does it upstage Christ, but is that of a loving mother, or elder sister, who has treasured all these things in her heart! God both uses mediators, and is "immediately" present to us in the New Covenant. And so I would be like Anna, speaking about Him to everyone who will listen."


Posted by Orthodox Christian Meditations, by Fr. Steven Kostoff at 10:00 AM