'One Baptism for the remission of sins...'

'I acknowledge one baptism

for the remission of sins.' 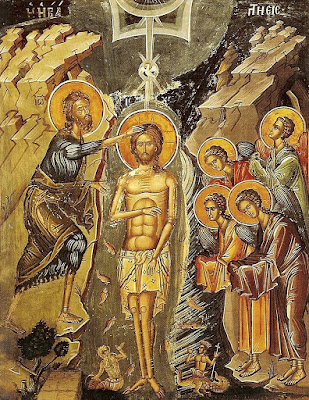 The Feast of Theophany is more ancient that that of Christ's Nativity on December 25. In fact, it was precisely on 6 January that the Church first celebrated Christ's birth (and the adoration of the Magi) together with His baptism in the Jordan. These events - of the greatest significance not only in the life of Christ but in the "economy" of our salvation - were united in one celebration known as Theophany, which means "manifestation of God." (The Feast is also referred to as Epiphany, which simply means "manifestation").

In His Nativity and in His Baptism, Christ is "manifested," or "revealed," to the world as the Light of the world in order to dispel the darkness of ignorance and spiritual blindness which are the direct result of sin. This Feast of Theophany is also referred to as the "Feast of Lights." It was in the 4th c. that we began to celebrate our Lord's Nativity (and the adoration of the Magi) as a separate and unique event on 25 December, while 6 January remained as the Feast of Theophany on which Christ's Baptism was commemorated.

Why did the Feast of 6 January retain the title of Theophany/Epiphany instead of 25 December, when the manifestation of the eternal Light was first revealed in His Nativity in the flesh? St. John Chrysostom writes: "...because it was not when He was born that He became manifest to all, but when He was baptized; for up to this day He was unknown to the majority."

But not only was the Lord Jesus revealed to the world as He began His public ministry with His Baptism in the Jordan at the hands of St. John the Baptist. The Holy Trinity was manifested, for the "voice of the Father" bore witness to His beloved Son, and the Spirit, "in the form of a dove," descended and rested upon the Son. The trinitarian nature of God was manifested when Christ came to the Jordan to be baptized.

Yet, if baptism is for the "remission of sins," then why is Christ baptized, for He is without sin (I PET. 2:22; HEB. 4:15)? The liturgical texts repeatedly ask and answer this question for us in the following manner: "Though as God He needs no cleansing, yet for the sake of fallen man He is cleansed in the Jordan;" "As a man He is cleansed that I may be made clean." Christ is representative of all humanity. He is baptized for our sake. It is we who are cleansed and regenerated when He descends into the waters of the Jordan.

O what a strange and inconceivable thing it is! We did not really die, we were not really buried; we were not crucified and raised again; our imitation of Christ was but in a figure, while our salvation is truth. Christ actually was crucified and buried, and truly rose again; and all these things have been transmitted to us, that we might by imitation participate in his sufferings, and so gain salvation in truth.

Actually, all of creation participates and is sanctified by the manifestation of God's Son in the flesh: "At Thine appearing in the body, the earth was sanctified, the waters blessed, the heavens enlightened."

We die to sin in Baptism and are raised to new life - for this reason the baptismal font is both tomb and womb as St. Cyril of Jerusalem tells us. Our pre- and post-baptismal lives must manifest some real change, according to St. Gregory of Nyssa. In fact, I would like to append a few paragraphs from some of St. Gregory's writings about Baptism in order to allow him to describe the meaning of that need for change. St Gregory wrote at a time (4th c.) when he could presuppose adult baptism as the norm, but we can apply his teaching to our own consciousness of being Christians as we grow up in the Faith following "infant baptism":

When discussing baptism and spiritual birth, we have to consider what happens to our life following baptism. This is a point which many of those who approach the grace of baptism neglect; they delude themselves by being born in appearance only and not in reality. For through birth from above, our life is supposed to undergo a change. But if we continue in our present sinful state then there is really no change in us. Indeed, I do not see how a man who continues to be the same can be considered to have become different when there is no noticeable change in him.Now the physically born child certainly shares his parents' nature. If you have been born of God and have become His child, then let your way of life testify to the presence of God within you. Make it clear who your Father is! For the very attributes by which we recognize God are the very marks by which a child of His must reveal His relationship with God. "God is goodness and there is no unrighteousness in Him." "The Lord is gracious to all ... He loves His enemies." "He is merciful and forgives transgressions." These and many other characteristics revealed by the Scripture are what make a Godly life.

If you are like this and you embody the Spirit of God, then you have genuinely become a child of God, but if you persist in displaying evil, then it is useless to prattle to yourself and to others about your birth from above. You are still merely a son of man, not a son of that Most High God! You love lies and vanity, and you are still immersed in the corruptible things of this world. Don't you know in what way a man becomes a child of God? Why in no other way than by becoming holy!

St. Gregory challenges us to remain ever-vigilant to our own baptism when we "put on Christ" and when we committed ourselves to a "mode of existence" that reveals Christ to the world.

Posted by Orthodox Christian Meditations, by Fr. Steven Kostoff at 6:29 AM