I intend on sharing some of the many articles, essays and statements about the issue of racism that have been recently written, and which have come to my attention. Now that the issue has become one of a burning national concern (yet again) we, as Orthodox Christians, need to have a firm grasp of just what the Church teaches about "race," and how the Church condemns all forms of racism. The theological foundation of that condemnation adds a real sense of depth to our position. What we teach about race/racism may seem to be quite obvious, but to this day it does not seem to be that obvious to various sectors of our society.

As we continue to enlighten and educate ourselves as Orthodox Christians, we further our own ability to articulate our position with clarity and depth. The "solution" to the problem of racism is in the Church where all are one in Christ Jesus. Our vocation is to take that aspect of the "new creation" out into the world with us. In this incredible text from St. Maximus the Confessor (+662) we read of a vision of unity within the Church which is breathtaking in its scope and depth. There can be no divisions within the Church, but of course there is a legitmate "diversity" that respects human uniqueness and personhood in a way that we can only dream of even in the twenty-first century. In fact, a great deal of the wonder of this text is how it resonates for us living today, dealing with multiple levels of divisiveness. In this 7th c. text (!) we are given a vision of that "new creation" in Christ that we must try and embody within our lives and communities:

It is in this way that the holy Church will be shown to be active among us in the same way as God, as an image reflects its archetype. For many and of nearly boundless number are the men, women and children who are distinct from one another and vastly different by birth and appearance, by race and language, by way of life and age, by opinions and skills, by manners and customs, by pursuits and studies, and still again by reputation, fortune, characteristics and habits; all are born into the Church and through it are reborn and recreated in the Spirit. To all in equal measure it gives and bestows one divine form and designation: to be Christ's and to bear his name.


Essentially, St. Maximus is extending the "radical" teaching of St. Paul about the newly-established unity in Christ:

There is neither male nor female, neither Jew nor Greek, neither circumcision nor uncircumcision, neither barbarian nor Scythian, neither slave nor free, but he is all and in all. (Col. 3:11)


Here is a fine essay by Abbot Tryphon of the All-Merciful Savior Monastery "somewhere" on the west coast. It is rather obvious in its message, but is a measured and positive message that also reminds us of some basic biblical principles on Orthodox anthropology. It also offers a helpful pastoral challenge toward the end.

The Evil of Racism


Racism has no place in the life of a Christian. 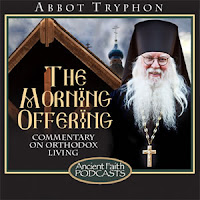 It is important to understand that genetically, all humans are of but one race. Indians, Arabs, Jews, Caucasians, Africans, and Asians, are not different races, but rather, different ethnicities of the human race. God created all humans with the same physical characteristics, with only minor variations. Furthermore, He created all humans in His image and likeness (Genesis 1:26-27), and has invited all of us to enter into communion with Him.

A black man is just as much my brother as a fellow Scotsman like myself. In the Book of Acts we read that with the coming of the Holy Spirit, diverse expressions of languages were being spoken. And in Revelation we see a glimpse of eternity with men and women from every tongue, tribe, and nation making up the choir of eternal praise (Rev. 7:9). That the writers of Scripture took notice of ethnicity, and saw diversity as good, makes it impossible for the Christian to hold to thoughts of racial superiority, or separation of the races.

How can we hold to racist ideologies when even the Apostle John hinted at prejudice concerning Jesus, “Can anything good come out of Nazareth (John 1:46)?” How can we dare hold to racist opinions when the Lord Jesus Christ presented parables which even offended the religious leaders of His time? The Parable of the Good Samaritan (Luke 10) and the story of the Samaritan woman at the well (John 4) make it impossible for us to hold to ideas of ethnic superiority over different races. Even our Orthodox iconography intentionally reflects the full range of skin hues when painting a saint’s face in order to stress the interconnectedness and blessedness of all races of humanity.

All forms of racism, prejudice, and discrimination are affronts to the work of Christ on the cross. Jesus Christ died that all men might be saved, be they Jews, Africans, Spanish, Norwegians, Asians, or whatever. In Christ we are united as One Body, and as humans we are all of one race. Ethnicity should mean nothing for the Christian, and our parishes should demonstrate the truth of the ethnic diversity of the Kingdom of God. If we hold to racist beliefs we only demonstrate how far we have distanced ourselves from the teachings of Our Lord. Can a Christian be a racist? The answer is an emphatic NO!

So, how do we end racism in America? We do so by acknowledging the racism that resides in ourselves, and by making a concerted effort to root it out. Saint Seraphim of Sarov told us that change begins with me, and that when I acquire inner peace, thousands around me will be saved.

I am reminded of the time I was one of the speakers at a large rally in downtown Seattle, commemorating the Armenian Holocaust, the systematic mass murder and expulsion of 1.5 million ethnic Armenians carried out in Turkey and adjoining regions by the Ottoman government between 1914 and 1923. After parking my vehicle, I was walking toward Pacific Plaza for the rally when I came face to face with three young black men. Knowing they likely were thinking this old white man was wishing he was walking on the other side of the street, I proclaimed in a loud voice, "isn't this a beautiful day?"

They all smiled broadly, and one asked what I was, as he gestured toward my black robe. "Why, I'm a Seahawks fan", I proclaimed, at which they all burst into laughter and rushed forward to give me a hug. As I continued walking toward the rally, I had a great big smile on my face, for I felt like they were all three my grandchildren, and I felt a great deal of love for them.

Each of us are given so many opportunities to demonstrate our oneness with black people, and when we acknowledge they, as a race, are coming out of 500 years where they've experienced fear and racism emanating from we white people, we will know the importance of reaching out to them with love and respect. Change begins with me, and as a Christian, it is my duty, and certainly my calling, to love everyone I meet as Christ.

With love in Christ,

Posted by Orthodox Christian Meditations, by Fr. Steven Kostoff at 10:12 AM