I received this from our former parishioner, Mother Paula, of the Holy Transfiguration Monastery in Ellwood City, PA. It is an interview with Fr. Paul Abernathy. 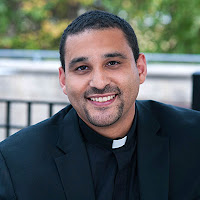 Perhaps some of you have already seen it, in that it has made quite an impact and is being shared throughout the Orthodox world. As I informed everyone last week, I believe, Fr. Paul is the grandson of the prominent Baptist minister, Ralph Abernathy, who was a leading figure, working closely with Dr. Martin Luther King, in the Civil Rights era of the 1950s and 1960s. I will assume that Fr. Paul has a deep and intimate knowledge of that whole movement through his grandfather. It would be fascinating to learn how Fr. Paul, with such a background, is now an Orthodox priest!

From what I just learned, there are now twenty-four African American men ordained to the priesthood of the Orthodox Church in North America. Fr. Paul himself is in the Greek Orthodox Archdiocese. As a "person of color," his remarks on the current protest movement within the black community are deeply insightful and helpful for us to learn more about the issues and struggles going on in our country as racial reconciliation - and simple mutual understanding - are still proving to be elusive in 2020.

What adds further depth to Fr. Paul's trenchant analysis and insights is his profound commitment to his Orthodox Christian Faith and the principles of the Gospel. And that is why reconciliation and mutual understanding are so important to him. Fr. Paul is very articulate and dynamic. If he represents the next generation of leadership within the Orthodox Church, then we will be in good hands.

I highly encourage everyone to find the time to listen to this interview and the practical steps Fr. Paul will outline in the Orthodox Church's need to respond to the African American community with the fulness of the Gospel in its Orthodox expression. Those of you with teenagers may want to include them in this dialogue. Our teens are sensitive to social issues and we should want them to know of an articulate Orthodox response/position to those very issues. The Church has to "step up" and make this effort - it is the twenty first century after all!

You might be interested in this interview. Father Paul Abernathy serves in an Orthodox mission in the city of Pittsburgh.