Break On Through (To The Other Side)

Christ is Risen! Indeed He is Risen! 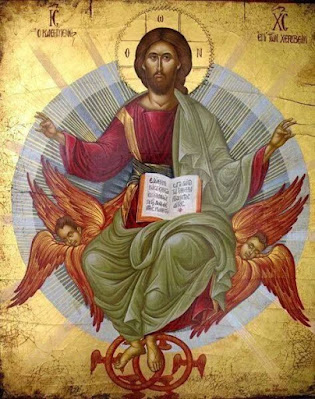 The Orthodox Church’s claim that Pascha is “the Feast of Feasts” is far more than poetic rhetoric. On the most basic level, it reminds us that the very existence of the Church is dependent upon the reality of Christ’s bodily resurrection “from the dead.” The Feast of Pascha makes that abundantly clear with an intensity that can be overwhelming. This, in turn, reinforces the blunt apostolic insight from the St. Paul: “If Christ has not been raised, then our preaching is in vain and your faith is in vain” (I COR. 15:14). No amount of modern “reinterpretation” of the Lord’s resurrection to the contrary can effectively silence or refute what the Apostle wrote. The Christian Faith – and the Church – stands or falls on the truthfulness of the bodily resurrection of Christ.

The Apostle Paul further warns us that a non-resurrected Christ has even worse consequences for those who would mistakenly proclaim a resurrection that never actually occurred: “We are even found to be misrepresenting God, because we testified of God the he raised Christ, whom he did not raise if it is true the dead are not raised” (v. 15). Finally, and with a brutal honesty that reveals the Apostle’s clarity of thought, he does not shrink from exposing the futility of purpose that a non-resurrected Christ would collapse into: “If for this life only we have hoped in Christ, we are of all men most to be pitied” (v. 19). That assessment sounds just about right to me.

Yet after decisively dealing with such theoretical scenarios, St. Paul confidently proclaims the Gospel that he had himself received (literally that which was “handed over” or “traditioned” to him): “But in fact Christ has been raised from the dead, the first-fruits of those who have fallen asleep” (I COR. 15:20). Therefore, when someone dies, we do not have to “grieve as others do who have no hope” (I THESS. 5:13). Christian hope is directed to the future and the eschatological fulfillment of God’s providential care for, and direction of, our common human destiny, culminating in a transfigured cosmos and “the redemption of our bodies” (ROM. 8:23). This is only possible if the “last enemy” – death itself – has been overcome from within, revealed to the world in and through the Risen Lord. Little surprise, then, that Pascha is the “Feast of Feasts” and “Holy day of Holy Days” if all of the above is what we indeed celebrate! Pascha has inaugurated the current paschal season of forty days – culminating in the Ascension - during which we intensify our focus on the Lord’s triumph over the sting of death. We, too, with the Apostle Paul exclaim with glad hearts: “But thanks be to God, who gives us the victory through our Lord Jesus Christ” (I COR. 15:57).

The natural cycle of life and death can weary the human heart with the inescapability of its endlessly reoccurring patterns: “Vanity of vanities! … All is vanity…. A generation goes, and a generation comes, but the earth remains forever” (ECCLES. 1:2,4). “And therefore,” according to Fr. Georges Florovsky, “the burden of time, this rotation of beginnings and ends, is meaningless and tiresome.” Our dissatisfaction with this closed cycle undermines the very claim that it is all “natural,” and therefore acceptable to the human spirit. On the contrary, human beings are always seeking an escape into whatever “reality” will allow us at least some temporary relief from the oppressiveness of a closed universe forever marred by corruption and death. If not Stoic resignation – “the impassibility or even indifference of the sage” (Fr. Florovsky) - then perhaps a desire to transcend the limitations imposed upon us by “nature,” will lead to a desperate search for an ecstatic experience – the dionysian impulse.

If I may indulge in a pop culture reference from the heady rock music of the past (over fifty years ago now!), there exists a song that more-or-less captures this inchoate desire for liberation: “Break on Through (to the Other Side).” For the moment forgiving the fatal excesses and self-indulgent pretensions of the singer-songwriter of this popular song; we can hear in its strained lyrics the human need to pass over (“break on through”) into a realm (“the other side”) that promises a heightened experience of reality that our mundane world cannot deliver. Of course, this can begin with “religion” or what we call “mysticism” (often a dangerous combination of mist + schism as I have heard it described). On a more secular level, the search for transcendence can be attempted through science or art. Within the context of the song we are now discussing, however, this possibly/probably refers to the rebellion associated with transgressing moral and ethical norms that seem to be restrictive and not liberating. This would be the dead world of bourgeois middle-class values supported by an insufferably bland moralistic Christianity. In other words, to all that the word “suburbia” implied in the 60’s. This is justified by the individual desire for self-autonomy, “freedom,” or a stance against hypocrisy. Only God knows how much of this was only a self-justification for indulging the passions and acting irresponsibly. In other words, the quest for freedom can easily degenerate into “license.” When the imagination fails, there is always the more prosaic and ever-popular “eat, drink and make merry, for tomorrow we die.” When practiced with serious abandon, though, this leads to a “breakdown” rather than a “breakthrough.” (Alas, this was the fate of our singer-songwriter).

All of these attempts to “break on through to the other side” can be both exhilarating and dangerous; heroic or pathetic; inspiring or disgusting. When pursued with a seriousness that reveals the human spirit’s refusal to submit, not only to mediocrity, but to the laws that eternally legislate the “house of the dead” that our world has become through human sinfulness, then such attempts at self-transcendence can earn our respect. Yet, an air of futility permeates all such autonomous attempts at self-liberation, for the human person has no such inherent capabilities apart from the power of God. A wholly different issue is raised by promethean pride that resists any “authority” greater than the self – including God. (It was the anarchist Bakunin who said: “If God exists, then I am a slave”). Here we cross over into the world of “mystical insolence” and demonic rebellion.

It is only Christ who has truly “broken through” to the “other side.” Again, this claim can only be made based upon the “fact” of His bodily resurrection.

Yet, it is only Christ who has truly “broken through” to the “other side.” Again, this claim can only be made based upon the “fact” of the bodily resurrection of Christ. Death itself – the fear of which subjects us to “lifelong bondage” - has been transcended in the voluntary death of Christ; a “resurrecting death” that was revealed to the Lord’s astonished disciples when He appeared among them following His burial and said: “Peace be with you.” (JN. 20:19) This was not a case of resuscitation and the resumption of natural life within the time and space of this world. For the Apostle Paul writes: "For we know that Christ being raised from the dead will never did again; death no longer has dominion over him” (ROM. 6:9). The human spirit’s “natural” desire for self-transcendence is no longer wasted on rebelliousness, utopian dreams, or nihilistic despair. Now it is Truth itself which has set us free. And this Truth is Christ. It is actually the will of a merciful and loving God that desires this for us; and God has acted to make this possible by raising Christ from the dead, the “first fruits” of a general resurrection that we await in patient expectation of God fulfilling the promises made to us “according to the Scriptures.”

We can close these “fragments” with again turning to Fr. Georges Florovsky who, employing some of the remarkable liturgical hymns that illuminate our celebration of Pascha, describes the one meaningful “breakthrough - our liberation from death - in the following manner:

Amidst the darkness of pale death shines the unquenchable light of Life, the Life Divine. This destroys Hell and destroys mortality. “Thou didst descend into the tomb, O Immortal, Thou didst destroy the power of death” (kontakion). In this sense Hell has been simply abolished, “and there is not one dead in the grave.” For “he received earth, and yet met heaven.” Death is overcome by Life. “When Thou didst descend into death, O Life Eternal, then Thou didst slay Hell by the flash of Thy Divinity” (Vespers of Great and Holy Friday).

Posted by Orthodox Christian Meditations, by Fr. Steven Kostoff at 6:30 AM