Passions and Virtues according to St. Gregory Palamas

As we leave behind the week of St. Gregory Palamas, and press on toward the Sunday of the Cross, I would like to share a few insightful passages from the book Passions and Virtues according to St. Gregory Palamas, by Anesris Keselopoulos. In these fine passages, he is essentially summarizing St. Gregory's teaching on both the passions and the virtues, and in so doing, offering excellent summaries of our entire spiritual tradition: 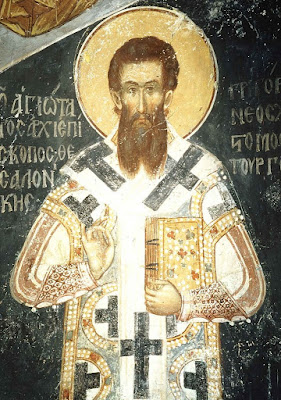 "The first aspect of the spiritual struggle is the wrestling for freedom from the passions, which leads to purification. The second is the acquisition of the virtues, which culminate in the heights of that 'divine passion' called theosis.

"In patristic teaching, it is commonly held that sinful habits reveal the soul's sickness, whereas virtues reveal its health and natural state.

"For the Fathers and St. Gregory Palamas, the word 'virtue' has a far richer meaning than what is commonly encountered in ethical teachings. They view the human person as 'the one who by virtue becomes like unto God Himself'.

"Besides natural revelation, which directs human beings towards God, the human person is also given the innate moral law of the human conscience. Palamas characterizes the conscience as a judge who is quite difficult to deceive, as well as a teacher with whom one cannot be unreasonable.

"In the work of our salvation, we see that if grace is essentially the action of God, then virtue is the joint-action of the human person and grace. And even though God is the One Who bestows the virtues, the human person is called to offer up his sweat for each of them.

"Indeed to speak about the imitation of the virtues of Christ apart from participation in the mysteries of the Church is from an Orthodox perspective impossible. The flesh of the Lord, as the Body of the Incarnate Word of God is, for Palamas and the Orthodox tradition, the point of contact between the human person and God, and it shows the way toward existential communion with the virtue of Christ."

Posted by Orthodox Christian Meditations, by Fr. Steven Kostoff at 11:43 AM