The Gospel Has Turned Things Upside Down

We have entered the season of the Triodion, that vast compilation of lenten hymnography gathered together in one book over the centuries that will guide us through the pre-lenten period; and then on through Great Lent and Holy Week; taking us to the very brink of the paschal celebration of the Death and Resurrection of Christ. 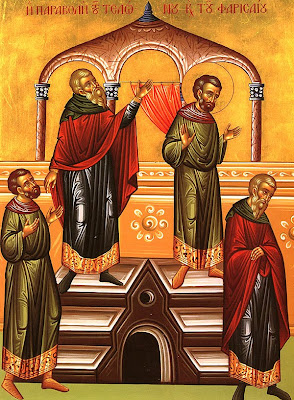 The inspired hymnography of the Triodion interprets the Scriptures in a direct and accessible manner, in the process making it challengingly clear that each person and event from the Scriptures – Old or New Testament; positive or negative – is meant to be applied to our own lives as someone or something to emulate or avoid. The Church always treats the Scriptures as a living Word, not as a chronicle of the past or as an abstract system of belief. This form of concrete realism is indeed more challenging than a presentation of untested ideas.

Be that as it may, the Triodion opens with the Sunday of the Parable of the Publican and the Pharisee (LK. 18:10-14). In the Orthodox Church, this reading is part of the pre-lenten cycle always prescribed for the fourth Sunday before Great Lent begins. The intentions of the Lord in delivering this parable are clearly expressed in the solemn pronouncement following the parable itself:

The pride and self-righteousness of the Pharisee – he who “exalts himself” – is rather starkly contrasted with the humility and repentance of the Publican – he who “humbles himself.” From these two examples of a revealed interior disposition, it is only the publican who is “justified” according to Christ. With a kind of “folk-wisdom” that would have resonated for his rural flock in early 20th century Serbia, Bishop Nikolai Velimirovich recasts the parable in an earthy story form that seeks to reinforce Christ’s teaching:

A man went into the forest to choose a tree from which to make roof beams. And he saw two trees, one beside the other. One was smooth and tall, but had rotted away inside, and the other was rough on the outside and ugly, but its core was healthy. The man sighed, and said to himself: “What use is this smooth, tall tree to me if it is rotten inside and useless for beams? The other one, even if it is rough and ugly, is at least healthy on the inside and so, if I put a bit more effort into it, I can use it for roof-beams for my house.” And, without thinking any more about it, he chose that tree.

And just to be certain, Bishop Nikolai drives home the moral point in the following conclusion:

So will God choose between two men for His house, and will choose, not the one who appears outwardly righteous, but the one whose heart is filled with God’s healthy righteousness.

The Pharisee acted according to the Law, keeping himself free externally from sin, fasting twice a week and paying a tithe on all that he had. How many parish priests secretly wish that that was precisely how their parishioners would live and act!? (For the moment we will not investigate just how parishioners would wish their priests to act). In fact, conventional wisdom would lead up to expect that in such a parable, the Pharisee would be praised precisely for his exact piety; and the publican would serve as a stark reminder of how not to live.

However, Christ turns all of this conventional wisdom "upside down," for it is the interior orientation of the heart that Christ is most concerned with; and it is here that the Pharisee twisted righteousness into self-righteousness which is basically a form of idolatry – that of the “self.” Do any of us escape that self-destructive trap? If not, then better to admit it, as St. John Chrysostom reminds us:

It is evil to sin, though here help can be given; but to sin, and not to admit it – there is no help here.

The humility of the publican is perhaps best expressed in a series of short descriptions – unwillingness to look up towards heaven, the beating of the breast, the plaintive cry: “Lord, have mercy on me, a sinner” – rather than an intellectually-constructed set of abstract notions.

Why is it so hard to be humble? Perhaps because it frightens us. But what would the source of this fear possibly be? We fear being taken advantage of, of being used by others, of losing ground in our struggle to not only get ahead, but to survive in a harsh world. We may pay lip-service to humility as Christians, but we act as if deep down we “know better.” Humility is hardly a recommended survival tactic! I would rather doubt that humility is the “stuff” of self-help literature.

This silent and implicit rejection of the virtue of humility makes a certain amount of sense if we equate humility – wrongfully, I am certain – with weakness, timidity, passivity, fear of conflict, etc. So we usually practice a safe form of humility when that will keep us in our “comfort zone.” But do we know better? Can we actually doubt the strength of a universally-acclaimed Christian virtue without having experienced it ourselves? Certainly we recognize the truth that we literally depend upon the humility of Christ for the gift of salvation! We praise and glorify Christ precisely because of His surpassing humility. Perhaps, then, if we ever made a sustained effort to be humble, we would appraise this essential virtue differently. As the saints teach us:

Until a human person achieves humility, he will receive no reward for his works. The reward is given not for the works but for the humility. (St. Isaac the Syrian)

A humble person never falls. Being already lower than any, where can he fall? Vanity is a great humiliation, but humility is a great exalting, honor and dignity. (St. Makarios the Great)

The Gospel – based on the scandal of the Cross – has turned many things upside down. In God’s judgment, according to Christ, the proud are humbled and the humbled are exalted. The parable of the Publican and the Pharisee sets this choice before us.

Posted by Orthodox Christian Meditations, by Fr. Steven Kostoff at 7:30 AM