Things Are Getting Scary 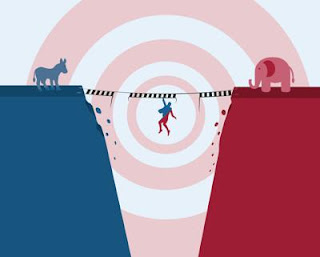 Politics are divisive, and that is eminently true this year as we approach the presidential election. There is even a sense of violence in the air. Of course, we condemn all violence, including the violence and looting that accompanied this last summer's massive peaceful protest demonstrations. Investigators are revealing that this unwanted violence came from both the "left" and from the "right." Yet, just last week we discovered ("in the nick of time?") an unprecedented conspiracy that changes the whole landscape of political discord surrounding us. And this, of course, was the arrest of members of a paramilitary group, described by authorities as "an anti-government, anti law-enforcement militia group."

This group - The Wolverine Watchmen of Michigan - was seriously planning to kidnap the governor of Michigan, Gretchen Whitmer. The immediate motive appears to be a highly-radicalized reaction in protest of Michigan's coronarvirus lockdown initiated back in April and May. Once kidnapped, there was talk of putting Gov. Whitmer on "trial." We can only assume that the "jury" would deliver a "guilty" verdict. The plot seemed ill-conceived, even amateurish, but it was a serious plot that included an armed storming of the Michigan state capitol, and perhaps the detonation of a distracting bomb. There was even wild talk of starting a "civil war." I believe that six militia men directly involved in the plot, and another seven, some from the East coast, were arrested. Some of the planning actually occurred in Dublin, OH.

A poll taken three years back by YouGuv revealed that eight per cent of Americans stated that they approve of violence as a necessary tool for promoting a political agenda. The same poll recently increased that number to about sixteen per cent. Still a low, but dangerous number, considered our overall population. Our two most powerful law enforcement agencies, Homeland Security and the FBI, have both released studies that claim that the greatest threat of domestic violence in America for 2021 is emanating precisely from these types of nationalistic militia groups. Just how "patriotic" does that sound? The strange irony here is that in a post-9/11 world, we anticipated our greatest threat to be from international (Islamic) terrorism. But that has not really materialized. Something to think about.

We thank God that this latest threat was exposed before anyone was hurt. From some of my reading, other militia groups in America were shaken up by these arrests. Is it too much to hope that they "get the message?" Or, are we facing more of this "voting by violence?" Violence from the "right" of from the "left" must be rejected as unethical and unsupportable. We have to trust the democratic process of voting our approval or disapproval of a particular candidate, platform or party, in a peaceful, civil and dignified manner. I am not aware of a different approach that would resonate with our Christian faith.

On the subject of voting, the following statement is from Archbishop Paul. It is a balanced approach to voting in this year's polarizing presidential election, coming up in about three weeks time. This is not a dogmatic statement, and Archbishop Paul is not here "rightly defining the word of truth." It is basically an "opinion piece," but written from a Christian perspective - a perspective that does not absolutize politics and which calls for mutual tolerance and civility.

Everyone is free to vote for either candidate for President and for other items on this year’s ballot. A person’s vote seems to revolve around the policies each candidate puts forward during the campaign and the party platforms passed at each convention before the election. Everyone should vote according to each candidate’s policies and values that are consistent with their own values and beliefs. Some people may decide to vote based on where the candidates stand on the issue of sanctity of life. Others may base their vote on how the candidates stand on other issues. They may even decide to vote for a candidate that doesn’t support the overturn of Roe vs. Wade. Yet they still accept the Church’s teaching that abortion is a sin. No one should be condemned or harshly criticized for how they vote. One’s vote should be exercised freely. A person can share whom they voted for, but there is no need to make an overly public display of it.

When it comes to our kids, I do have one question to ask: Do schools still stage mock elections using a ballot of items to vote on? I think it would be a great idea if parents could sit down with their children who are capable of looking at a ballot and making a choice. If they are willing to share how they voted, parents can walk their children through each ballot item. They could help them to articulate why they voted the way they did. What did they consider in their decision? This is where the question might be asked, is the vote consistent with what the Church teaches? Is that a fair question to ask? Voting should not be based on how one feels.

The issue that concerns me the most today is the mutual intolerance that exists between our political parties. Stories are being put forward about what will happen if a certain candidate doesn’t win, causing confusion and worry. Cable news and social media outlets seem to fan these tensions with talks of mass protests and riots. This is a problem. We should do nothing in family life that encourages this kind of behavior. There is no room for intolerance and hatred in determining how a person votes. To act in this manner is contrary to our faith. Parents, do all you can to foster a sober and serious attitude with your children when it comes to voting. Voting is to be based on what someone thinks and not what they feel.

The blessing of the Lord be upon you,

Posted by Orthodox Christian Meditations, by Fr. Steven Kostoff at 5:57 AM