The Fathers & Theologians on The Lord's Prayer

At this past Sunday's Liturgy, the homily focused on the beginning of the Lord's Prayer, the name by which we call upon God, and that is "Our Father." (Often, the prayer is referred to as the "Our Father" based on those opening words of the prayer). 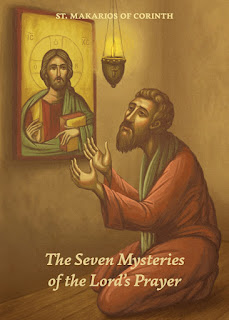 My intention was to share some of the insights into the word "Father" for God as they have come down us from earlier saints; and from some of our more well-known theologians and teachers from recent times. Therefore, I primarily read a series of excerpts from these writings, which revealed a shared (Orthodox) understanding of the prayer; and various unique insights from each author, which only begin to further reveal the depth and riches found in the Lord's Prayer. Some of you who joined us through zoom or through Facebook told me that had a hard time hearing me clearly, for I delivered the homily from the doors of the sanctuary, as I have been struggling with a cough and thus thought it best to keep a distance between us.
Be that as it may, I planned on sharing these excerpts with the parish and listing the various sources from which they come, in case you want to turn to them on your own. For I have only chosen key passages from much longer works that are all of the highest quality.

Through the centuries, various of the Church Fathers and other early ecclesiastical writers have written long commentaries on the Lord's Prayer. Most of these commentaries are now found in English translation. Here are the sources of those passages that are included in this attachment:
The Fathers & Theologians on The Lord's Prayer (PDF)

The Lord's Prayer by St. Maximus the Confessor (+662). This absolutely brilliant and profound commentary can be found in Vol. II of The Philokalia.

The Seven Mysteries of the Lord's Prayer by St. Makarios of Corinth (+1805 Newrome Press). This wonderful commentary is embedded in a longer work that was written in order to exhort the faithful to recover the practice of frequent communion. This early treatise is behind our own 20th c. "eucharistic revival." Quoting St. Maximus the Confessor, St. Makarios lists the seven mysteries as: 1) Theology; 2) Adoption; 3) Equality With Angels; 4) Enjoyment of Eternal Life; 5) Restitution of Human Nature; 6) Abolition of the Law of Sin; 7) Destruction of the Tyranny of the Devil. Written in a warm style that emanates from deep faith.

Three Prayers - The Lord's Prayer/O Heavenly King/Prayer of St. Ephraim by Olivier Clement (SVS Press). Very insightful commentaries by one of the most renowned French Orthodox theologian of recent years. I believe that Clement died early in the 21st. c. All-embracing in his use of sources and knowledge, he was something of a French version of Fr. Alexander Schmemann.

Our Father by Fr. Alexander Schmemann (SVS Press). This commentary is based on a series of short broadcasts that Fr. Schmemann gave over Radio Liberty to people living in the former Soviet Union. There are many references, therefore., to agnostics, unbelievers and militant atheists. Whatever Fr. Schmemann spoke or wrote is worth listening to or reading. And that is quite true for this brilliant commentary.

PRAYER - Encounter with the Living God by Metropolitan Hilarion Alfeyev (SVS Press). Met. Hilarion is now one of the most prolific and distinguished theologians in the entire Orthodox world. He is a former student of Archbishop Kallistos Ware at Oxford. This book is about the concept and practice of prayer. It is meant to be something of a "primer," and I believe that that makes it all the more effective. Met. Hilarion's commentary is embedded in this book and is only about 25 pages long. But when a genuine theologian writes briefly, you find that almost every line has a particular and valuable insight.

I will probably continue using these sources for two or three more weeks.
Posted by Orthodox Christian Meditations, by Fr. Steven Kostoff at 11:00 AM