The Ascension: Our Destiny in Christ 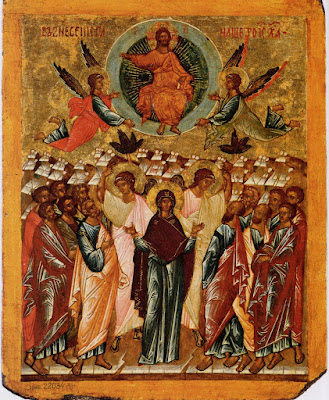 In the Nicene-Constantinopolitan Creed we profess,

Who for us men and for our salvation came down from heaven, and was incarnate of the Holy Spirit and the Virgin Mary, and became man.... And the third day He arose again, according to the Scriptures, and ascended into Heaven, and sits at the right hand of the Father.

What a wonderful expression of the great mystery of the "descent" and "ascent" of the Son of God! The eternal Son of God becomes the Son of Man, descending into our world to live among us and to teach us about, and prepare us for, the Kingdom of God. This is what we call the Incarnation.

This movement of descent is only completed when Christ is crucified and enters the very realm of death on our behalf. There is "nowhere" further to descend (in)to. Thus, there are no limits to the love of God for His creatures, for the descent of Christ into death itself is "for our salvation."

The Son of God will search for Adam and Eve in the very realm of Sheol/Hades. He will rescue them and liberate them as representative of all humankind, languishing in "the valley of death." Since death cannot hold the sinless -- and therefore deathless -- Son of God, He begins His ascent to the heavenly realm with His resurrection from the dead. And He fulfills this Paschal mystery with His glorious ascension.

As Saint Paul writes, "He Who descended is He Who also ascended far above all the heavens, that He might fill all things" (Ephesians 4:10). The One Who ascended, however, is now both God and man, our Savior, the Lord Jesus Christ. It is the incarnate, crucified, risen, and glorified Jesus Christ Who is now seated at "the right hand of the Father," far above the heavens. It is the glorified flesh of the Incarnate Word of God which has entered into the very bosom of the Trinity in the Person of Christ.

With all due solemnity we are commemorating that day on which our poor human nature was carried up, in Christ, above all the hosts of Heaven, above all the ranks of angels, beyond the highest Heavenly powers to the very throne of God the Father.

This is simultaneously our ascension and our glorification, since we are united to Christ through holy Baptism as members of His Body. Therefore, Saint Paul can further write, "For you have died, and your life is hidden with Christ in God" (Colossians 3:3). Out of our physical sight, we now "see" the glorified Christ through the eyes of faith.

Saint Leo further explains how important this spiritual insight is:

For such is the power of great minds, such the light of truly believing souls, that they put unhesitating faith in what is not seen with the bodily eyes; they fix their desires on what is beyond sight. Such fidelity could never be born in our hearts, nor could anyone be justified by faith, if our salvation lay only in what is visible.

It is upon this ordered structure of divine acts that we have been firmly established, so that the grace of God may show itself still more marvelous when, in spite of the withdrawal from men's sight of everything that is rightly felt to command their reverence, faith does not fail, hope is not shaken, charity does not grow cold.

The Great Feast of the Ascension is not a decline from the glory of Pascha. It is, rather, the fulfillment of Pascha, and a movement upward toward the Kingdom of Heaven. It is the joyful revelation of our destiny in Christ.

By the time we reach the end of the special forty days of Pascha, a certain fatigue has set in, and the initial explosion of joy that characterized Pascha seems already like a dim memory (though experienced only forty days ago!). But is it possible for the Feast of the Lord's glorious Ascension to awaken us yet again to the great joy of our salvation and destiny in Christ?

We believe that we are not orphans in a universe devoid of meaning, but actually children of God, "who were born, not of blood nor the will of man, but of God" (JN. 1:13).  In his First Epistle, St. John further elaborates on this: "Beloved, we are God's children now; it does not yet appear what we shall be, but we know that when he appears we shall be like him, for we shall see him as he is" (I JN. 3:2).

We do not know "when" that will be, only that God will fulfill His promises already revealed in the risen and glorified Lord Jesus Christ.