The Publican, the Pharisee, and the struggle for humility 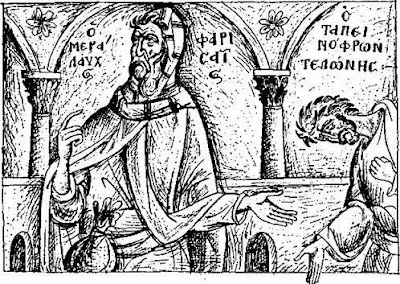 The Parable of the Publican and the Pharisee confronts us with a stark contrast between religious pride and self-righteousness on the one hand, and heartfelt humility and repentance on the other hand. The pharisee, of course, is the one who manifests pride, and it is the publican who manifests humility.

The Lord closes this short parable by declaring the Pharisee “condemned” and the publican “justified.” This is a genuine “reversal of fortune,” upending our preconceived notions of piety and righteousness as forcefully as it must have struck those who initially heard the parable as delivered by the Lord. Yet, that reversal of fortune should not obscure other notable factors also working within this parable.  Being a relatively short parable, perhaps we should include the text here for reference:

Two men went up into the temple to pray, one a Pharisee and the other a tax-collector.

The Pharisee stood and prayed thus with himself, 'God, I thank thee that I am not like other men, extortioners, unjust, adulterers, or even like this tax-collector. I fast twice a week, I give tithes of all that I get.

But the tax-collector, standing far off, would not even life his eyes to heaven, but beat his breast, saying, 'God, be merciful to me a sinner!'


Christ is not condemning the actions of the pharisee. The Lord is not telling us through this parable that the pharisee – or anyone else, and that includes us – is wasting both time and energy by going up to the temple to pray, by fasting and by tithing. These are not being condemned as empty practices, consigning all such practitioners to the barren realm of hypocrisy and religious formalism.


We, as contemporary Christians, are encouraged to enter the church with regularity and offer our prayer to God, to practice the self restraint and discipline of fasting, and to share our financial resources with the generosity implied by the biblical tithe. We could add other practices to that. In fact, we would do well to imitate the outward actions of the pharisee in practicing our Faith!


Yet, on a deeper and far more significant level, the pharisee got it all wrong. He was consumed by a self-satisfied and self-righteous interior attitude that left no room for God to transform him by divine grace.

The Pharisee’s prayer was seemingly directed to God, but in reality it was an exercise in self-congratulations (for not being like other sinful men). Here was a man who did not suffer over low self-esteem!

The pharisee was self-centered, but not God-centered. Something went wrong, and the self replaced God as the center of his energy and passion. The exterior forms of piety that he practiced were disconnected from the interior realm of the heart, where God is meant to dwell and, again, transform the human person from within, so that each person becomes less self-centered and more God-centered with time and patience.

Based on our knowledge of the role of the publican in first century Israel, we can be assured that Christ was not “justifying” the particular “lifestyle” that made the publicans such notorious and despised figures of that world. In fact, they were always included with “harlots” when reference was being made to the marginalized, if not ostracized, members of first century Judaism.

Rather, the publican was declared “justified” for the very fact that he recognized and was profoundly struck by just how sinful he had become in cheating and defrauding his neighbor as a hated tax-collector working for the occupying Roman authority. He had the experience of true contrition of heart.  He realized that he stood self-condemned before the Lord, yet he did not despair but cried out plaintively,  “God, be merciful to me a sinner!”

Human persons are not saved as sinners, but as sinners who in humility repent before God and then offer the fruits of repentance.

The hymnography for the Sunday of the Publican and the Pharisee exhorts us to flee from pride and to embrace humility.

We live in a culture obsessed with the self and thus not only susceptible to, but openly promoting, both pride and vainglory. “In your face” is widely seen as a “heroic” gesture of self-defiance and legitimate self-promotion. Humility is treated as weakness and ineffectual for “getting ahead” or for fulfilling one’s desires.

“For where your treasure is there will your heart be also.”