CHRIST IS BORN!
GLORIFY HIM!


The Gospel reading for the Great Feast of the Nativity of Our Lord is Matthew 2:1-12.  This passage proclaims the Good News that the Savior was born in Bethlehem according to the biblical prophecies. 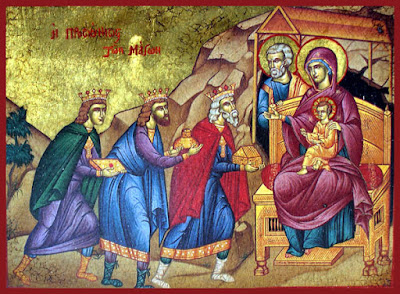 The star guides the Magi and they, in turn, bring their gifts of gold, frankincense and myrrh to the newborn Child in acknowledgment that He is unique and a true King, testified to by cosmic signs that even the Gentile Magi can properly interpret.  Joyous as this is, there is already a hint of the ultimate destiny of Christ in that myrrh is used in the burial customs of the Jews.

On the Second Day of the Nativity, we complete the reading of the second chapter of Saint Matthew’s Gospel—2:13-23, which immediately introduces us to the tragic reality of the massacre of the innocent boys in and around Bethlehem who were two years old or younger.  The previous joy of the Savior’s Nativity is replaced by the wailing and lamentation of the mothers of these innocent children, in fulfillment of the prophecy of Jeremiah:

“A voice was heard in Ramah, wailing and loud lamentation, Rachel weeping for her children; she refused to be consoled, because they are no more” [Jeremiah 2:18]. 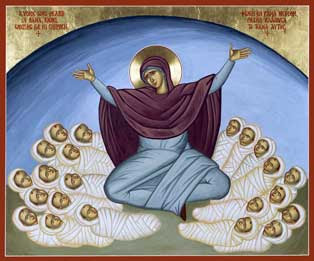 The shadow of the Cross lay across the infancy narratives in this Gospel, for in the immediate post-Nativity period, these male children become the first of many martyrs who must die because Christ has entered the world, as many of the powerful of this world—following the dark example of King Herod—will not receive Him; they will actually despise Him and turn against His followers.  Thus, the suffering of innocent children is somehow taken up by God as an offering in a sinful world that fluctuates between light and darkness.

And we must acknowledge that the suffering of innocent children continues to the present time - a suffering directly caused by human wickedness. We now understand that the cave of the Nativity anticipated the tomb of Christ’s burial, and that the swaddling clothes anticipated the grave clothes with which Christ would eventually be bound following His death on the Cross.

On the Third Day of the Nativity, we commemorate the Protomartyr Stephen, the first to die for his faith in Christ in the post-Resurrection community of the newborn Church.  St. Stephen's lengthy speech to his fellow Jews, in which he upbraided them for their lack of faith; and in which he proclaimed Jesus as the Risen and Ascended Christ is recorded in ACTS 7.  His brutal martyrdom by stoning followed as his testimony resulted in a furious and deadly rejection of his convicting words. In fact, "they gnashed their teeth against him." (ACTS 7:54) 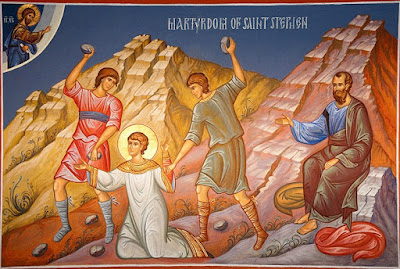 Martyrdom has always been a distinct and powerful witness to Christ.  Actually, “from the beginning” the Incarnation and Martyrdom are inextricably joined together in a world torn by the tension between darkness and light.  To our great joy, we know "that the light shines in the darkness, and the darkness has not overcome it." (JN. 1:5)

The kontakion for the Feast of Saint Stephen captures the movement between the joy of Christ’s birth and the sobering reality of what Christ’s coming meant for some:

Yesterday the Master assumed our flesh and became our guest;
Today His servant is stoned to death and departs in the flesh:
The glorious first martyr Stephen!

There is no greater witness to Christ than that of the martyrs—flesh and blood men, women and children who gave their lives for the Lord in the sure hope and assurance that eternal life awaited them in the Kingdom of God.

If we exchange a “Merry Christmas” with others, we always need to be mindful of the commitment we are making to the newborn Christ.  As we temporarily indulge in the days of the Feast, we realize that the Christian life is ultimately a commitment to discipline and restraint, even the “crucifixion” of the flesh with all of its desires, in order to “witness” to Christ as disciples who believe that His advent in the flesh, culminating in His death and resurrection, has prepared a place for us in His eternal Kingdom where there is “life everlasting.”