Christ the Conqueror of Hell: A Deep Discussion 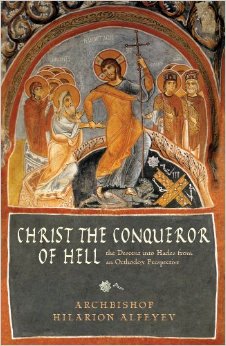 CHRIST IS RISEN!
INDEED HE IS RISEN!

We had quite an intense but all-too-short post-Liturgy discussion yesterday on a series of eschatological themes (from the Greek ta eschata or "the last things") - primarily judgment, heaven and hell and the whole issue of salvation (we call this soteriology, from the Gk. word for salvation, which is soteria).

The discussion arose after I briefly spoke about a book that I am currently reading by Archbishop Ilarion Alfeyev, Christ the Conqueror of Hell - The Descent Into Hades from an Orthodox Perspective.  This is a fine study that reveals just how pervasive this theme is, beginning with the New Testament and permeating early Christian poetry, various apocryphal Gospels, the writings of the Church Fathers and our paschal liturgical texts.  It is a very fine study by an excellent contemporary scholar and theologian.

"Hades" is the Gk. word for the Hebrew "sheol" which refers to the realm of the dead, a shadowy, disincarnate and wholly bleak existence cut off from the grace of God.  This is the Old Testament abode of the dead. Christ entered that realm as its Conqueror - not as its Victim as found later in aberrant Protestant theology - releasing those who were bound there and incapable of saving themselves, raising them up with Himself, and thus "trampling down death by death."

As one of countless examples, from The Odes of Solomon, a 2nd c. collection of poetical theological texts, we read in the expressive Ode 42 of Christ preaching to the dead in Hades:

Sheol saw me and was shattered,
and Death ejected me and many with me.
I have been vinegar and bitterness to it,
and I went down with is as far as its depth ...
And I made a congregation of living among the dead;
and I spoke with them by living lips,
in order that my word may not be unprofitable.
And those who had died ran toward me;
and they cried out and said, Son of God, have pity on us.
And deal with us according to your kindness,
and bring us out from the bonds of darkness.
And open for us the door by which we may come out to you;
for we perceive that our death does not touch you.
May we also be saved with you, because you are our Savior.
Then I heard their voice, and placed their faith in my heart.
And I placed my name upon their head,
because they are free and they are mine.
(Ode 42, 11-20)

There is also the writings of the great Church Fathers, such as St. Gregory the Theologian's Hymn to Christ after Silence, on Easter:


Surveying the sources, both East and West, various opinions have been formulated about the meaning of the descent into Hades:

While the fact that the descent was not itself questioned by the representatives of church tradition, there existed various interpretations of this event. Many writers maintained that Christ freed all who were held captive in hell/hades, others thought that only the Old Testament righteous were liberated, and another group believed that only those who came to believe in Christ and followed him were saved. Finally, others held that Christ freed only those who had lived in faith and piety during their earthly lives.

The first interpretation is most widely reflected in the liturgical texts of the Orthodox Church:  that Christ "emptied" hell and "not a single mortal" remained. The first and second opinions were endowed with equal authority in the Eastern Christian patristic tradition, but with the passing of the centuries the first gradually gave way to the second.  In the Western tradition after Augustine, the second and fourth views were given preference.  (Christ the Conqueror of Hell, p. 204.)

Archbishop Ilarion makes it clear that unanimous positions as to the precise and ultimate effect of Christ's descent into Hades has not been reached. He summarizes these differences of interpretation as follows:

Yet, Archbishop Ilarion does draw some clear conclusions of his own, which he argues are authoritatively supported by the various sources of Church doctrine which he outlines in his conclusion, beginning of course, with the Holy Scriptures:

First of all, belief in Christ's descent into Hades and his preaching to the dead is not a theologoumenon  (this means a theological "opinion"), but belongs to the realm of general church doctrine.  This belief is based on the New Testament, works of the church fathers, and liturgical texts.  It is, therefore, as significant for today's Orthodox Church as it was for the Christian church of the early centuries.  The teaching that Christ granted to all the possibility of salvation and opened to all the doors to paradise should also be considered general church doctrine.  This teaching is confirmed by the vast majority of liturgical texts referring to the subject, as well as by works of many church fathers. (Ibid. p. 208.)

This, however, cannot be confused with the position that all are or will be saved, as Archbishop makes clear:

Did all or only some follow Christ? Answers to this question belong to the realm of theologoumena. The doctrine on salvation formulated by the eastern fathers, particularly by St. Maximus the Confessor and St. John Damascene, can serve as a key to answering this question. According to this doctrine, all are called to salvation but not everyone responds. The only hindrance to salvation is one's free will to resist God's call.  Such an understanding radically differs from the doctrine of predestination formed in the Western Augustinian tradition. (Ibid, p.208-209.)

Archbishop Ilarion's book is a veritable treasure trove of wonderful texts that endlessly explore the essential theme of the Descent of Christ into Hades and the destruction of (the sting) of death.  It is a bit of a commitment, but for those who are interested, quite readable and highly rewarding.  For your convenience, here is the link.